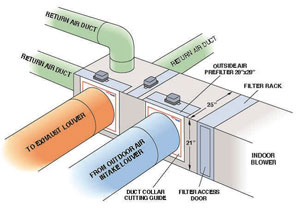 EconoPLENUM™ is a return air plenum designed to be installed on any split system horizontal application through 5 tons. Also, add an Economizer to existing rooftop applications. Dampers can be ordered on either left or right side to accommodate the equipment position. 21” x 25” equipment connection dimensions allow this plenum to mate directly to most filter frames or directly to equipment. EconoPLENUM™ is 24 gauge sheet metal and is 4 feet long with 2” thick (R-8) duct liner insulation.

The outdoor air damper with pre-filter is mounted in the front half on the side of the plenum. A 20”x 20” x 1” pre-filter is installed to remove any large contaminants from the incoming outside air. The damper is mounted on the inside of the plenum directly behind the cutting guide. This damper will open when outside air is required to allow outside air through the equipment and into the conditioned space. Once the opening is cut and the insulation is trimmed away, the filter and the damper blades will be showing. Duct-tab or spin-in starting collars may be installed into the opening.

How it works: When there is a cooling call and the outside air is suitable (below OA setpoint), the RA damper will close. Also, no compressor will be energized. As the RA damper closes, this stops any air from coming back to the system from the building . At the same time, the OA damper and the EA damper opens. This allows outside air to be drawn into the equipment through the OA louver and OA damper. Because the RA damper is closed, the building is being pressurized including the back half of the return air plenum. Since the EA damper is open, this pressure is allowed to move out the exhaust damper, through the exhaust duct and out the exhaust louver. The cooling call is satisfied with clean, pressurized and FREE outside air.